2,000 people marched from Magic Island to Kapiolani Park in this year's MLK Day Parade; many more thousands watched from the sidewalks along the route.


World Can't Wait-Hawai`i had a strong contingent:  Joel freestyled from the flatbed truck, accompanied to the beat of drummers, the huge drone replica flew above the truck, and banners linked the drone war on people around the world with the epidemic of police brutality and murder.  Marchers held signs opposing police brutality, the U.S's use of drones for warfare and surveillance, and for the freedom of Palestinians.

Many people along the route clapped or moved to the drums and when Joel rapped out "Hands Up! Down't Shoot!" many raised their hands in an international show of solidarity with the victims of police brutality and murder.   Folowing are just a few photos:

Posted by Unknown at 6:17 PM No comments:

Put on Your Marching Shoes!

On the 13th Anniversary of the opening of the notorious Guantanamo Prison, Ann Wright will speak about the current status of the prison, the condition of the remaining prisoners, and the U.S. government's "torture report".  Her talk will be preceded by a showing of the short video:  "Where is Fahd".  For more facts about Guantanamo read Things People Should Know About Guantanamo

January 22 is the anniversary of the Roe v. Wade decision and the right-wing fanatics are gearing up to use the full power of a Republican House and Senate to overturn it.   World Can't Wait-Hawai`i will have a march on the 22nd (see below) but we urge you to join us at this totally hilarious and heartbreaking abortion-themed film.   If you've seen the film, see it again!  If you've never seen it, don't miss it.


Monday, January 19, 9am at Magic Island
Join our Contingent in the MLK Day Parade!
Ferguson is Everywhere!
Black Lives Matter!
#We Can't Breathe!


Outraged by police brutality and police murder?   Encouraged by the emerging movement of resistance?   Be part of it by joining our contingent at the MLK Day Parade!

Gather at Magic Island by 9am.  We'll have a flatbed truck with big blue earth flags so we'll be easy to find.  You can ride on the flatbed, walk in the contingent, skate or skateboard.   Bring your family!   Make signs and put together a huge crew of friends, neighbors and family members!  If your kids are too small to walk the route bring  stroller or wagon.   Bring your drums and noisemakers and join an impromptu drumming group on the truck.   Make this fun, visible and energetic!

The parade goes from Magic Island to Kapiolani Park on Kalakaua Avenue.  There's a Unity Rally at the park with entertainment, booths and food.   However, our truck will also be returning to Ala Moana Park immediately after the parade if you want to go back to get your car.

Remember your water and sunscreen!


Thursday, January 22, 4pm-6pm
Gather in front of the State Capitol
Signholding from 4pm-4:30
March through downtown begins at 4:30pm


Across the country, women's right to abortion is in a state of emergency – and the future of women hangs in the balance. Having and raising a child can be a wonderful thing. But, forcing women to have children against their will is a form of enslavement.

This January 22nd, the anniversary of the legalization of abortion, there will be huge “March for Life” actions in DC and San Francisco.   Anti-Choice forces will also be holding a rally at the State Capitol on the 22nd and we'll be holding signs along Beretania.   Then at 4:30 we'll leave the Capitol and head for Bishop as people leave their office buildings with our demand:  "Abortion On Demand and Without Apology."   Join us!  Refuse to allow the right-wing fanatics to claim the high moral ground or go unopposed in the broad stage of society and calling out to millions to join in this fight for a woman's right to choice!.

)
Drones - Torture - Guantanamo - Demilitarization....
Get your signs ready and join us Saturday! 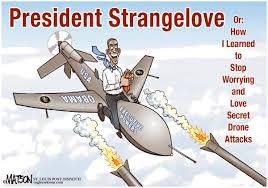 Even while the world is reeling from the disclosure of some of the details of the U.S. torture program, drones are continuing to drop on the people of Iraq, Pakistan and Yemen. Drones are constantly buzzing over the Gaza Strip, creating an atmosphere of fear.

Some are decrying the use of torture during the Bush administration, but little is being said about the Obama's drone program or Obama's "kill list" - all of which continue. Individuals targeted by drones have no opportunity to defend themselves; civilians in the vicinity of the assassination are written off as "collateral damage! Join us to demand that torturers be prosecuted. Join us in demanding an end to drone killing and surveillance.

Whatever your issue, join us this Saturday!

World Can't Wait-Hawai`i will bring some posters you can use or come with your own. We suggest parking at Aikahi Shopping Center and walking back toward Kailua along Kalaheo (Kailuana is only a few blocks away, just across the bridge). Contact your friends to car-pool. A car will leave the Revolution Books parking lot at 8:15 am if you need a ride -- but seats are limited so we suggest you e-mail worldcantwaithawaii@yahoo.com to make sure there's space.
Posted by Unknown at 6:47 PM No comments:

Police brutality and police murder are daily occurrences, yet brutal, murdering cops are almost never punished for their crimes;

In Honolulu, HPD shot their weapons at a "suspect" 22 times in a 50 month period; 11 of these shootings were fatal.  This is 4 times the national average, even though Hawai`i's rate of violent crime is one of the lowest in the U.S.

Of 148 complaints of police brutality against HPD, only 5 were sustained; none of the complaints for "unnecessary use of a deadly weapon" was sustained.


WE SAY NO MORE!
BRING THE SPIRIT OF FERGUSON TO HONOLULU!

Posted by Unknown at 6:33 PM No comments: 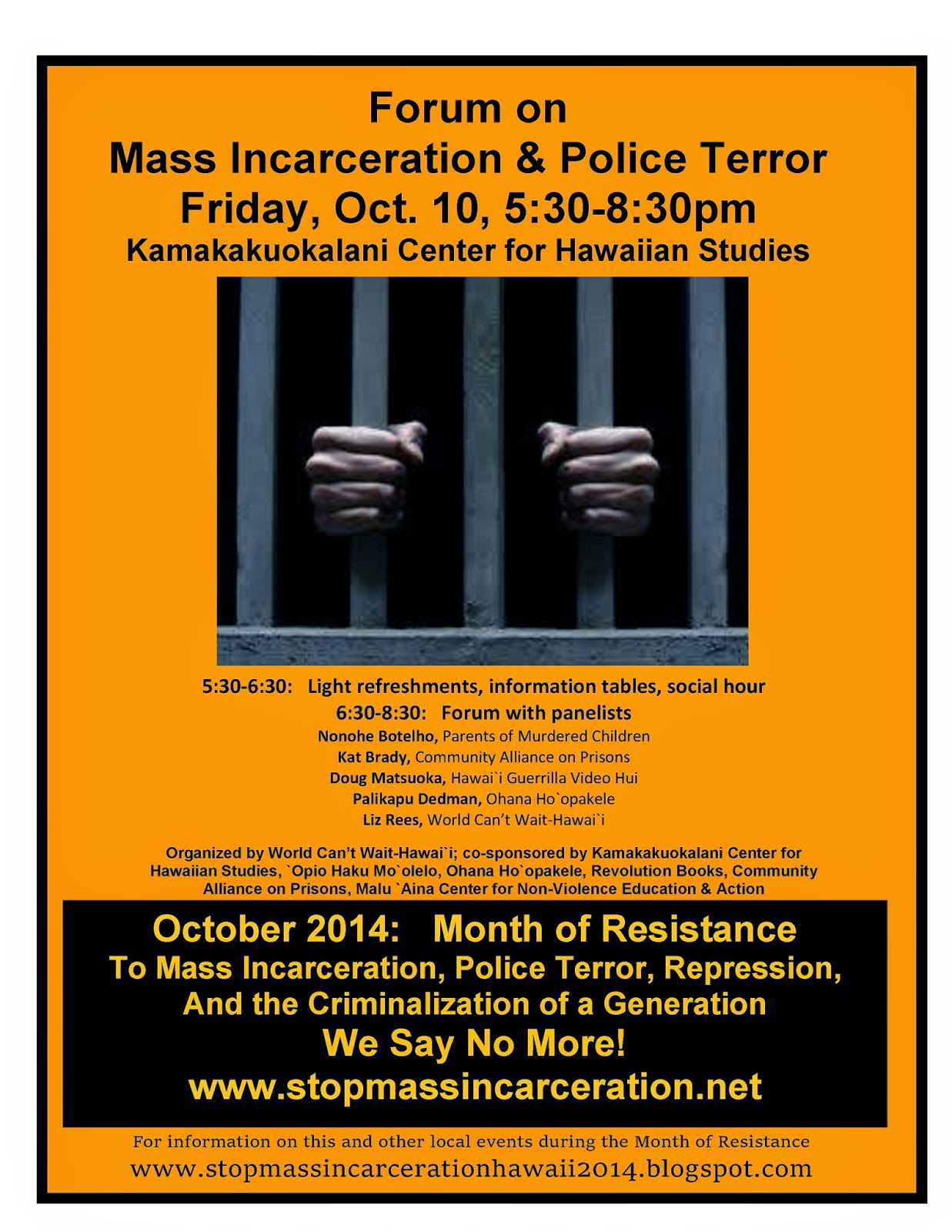 Posted by Unknown at 4:53 PM No comments:

Global Action Day Against the Use of Drones for Surveillance & Killing
Saturday, October 4, 2014
Protest & Signholding at the Corner of Kapahulu & Kapiolani
(in front of the Honolulu Zoo)
9:30am - 11am
Co-sponsored by World Can't Wait-Hawai`i & The Coalition for Justice in Palestine

If you're outraged by use of drones for killing and surveillance join us on Saturday!

The No Drones Network (www.nodronesnetwork.blogspot.com) and KnowDrones (www.knowdrones.com) have issued a call for a global day of action against drone killing and surveillance on Saturday, October 4th.

For an excellent article on the Obama's drone plan in Iraq and Syria see:  http://www.worldcantwait.net/index.php/obama/8575-obama-war-model-widespread-systematic-use-of-drones-in-iraq-Syria

Our Saturday protest (with our big drone replica) will be seen by tourists, as well as local residents headed for the beach and Zoo.   We'll have signs - or bring your own!

Thursday, August 14:  The Judge in the trial of Christopher Deedy acquitted Deedy of murdering Kollin Elderts and declared a hung jury with regard to the remaining charges of manslaughter and assault.   On August 29th she is to report on the status of the case and whether there will be a re-trial, or whether it will be dismissed.

Friday, August 15th:  About 100 people responded to a call made by the Coalition for Justice for Kollin Elderts and gathered in front of the Honolulu Zoo for a rally and a march through Waikiki.

Before the march, statements by organizers called on people to continue to fight for justice for Kollin Elderts, and against racism everywhere.  The murder of Kollin Elderts was linked to the epidemic of police brutality across the U.S., and especially to the recent murders of Eric Garner in New York and Michael Brown in Ferguson, Missouri.

Carrying signs reading "Justice for Kollin Elderts:  Victim of Racism," along with placards with the pictures of Elderts, Garner and Brown, the crowd took off along Kalakaua Avenue chanting:  "Justice! Justice! Justice for Kollin Elderts" and "Ku`e" as an agitator linked the murder of Kollin Elderts with the murders of Eric Garner and Michael Brown and called on people along the route to join the march. Many tourists were stunned that in Hawai`i - a place praised for racial harmony - they would be faced with demonstrators protesting murder by law enforcement and a racist system.

About 60 people gradually swelled to almost 100 as local people, a Black family, a homeless man, and others joined in.   A street performer along the route shared his own story about Kollin:  how Kollin had always stopped to put money in his hat and had complimented him on his performance.   A Kailua man who knew Kollin from his high school days recalled Kollin fondly saying:  "That agent gotta pay for murder."   A man from St. Louis, and with family in Ferguson, said he was calling home each day to hear more about the demonstrators there, but never expected to see Michael Brown's picture at a protest in Hawai`i.

As the march neared the Kuhio McDonald's where Kollin was murdered, Jon Osorio picked up the bullhorn and began singing "Hawai`i Aloha" as many in the crowd joined in and then stopped in front of McDonald's for a quieter time to remember Kollin's life.

Then the march took off again, returning to Kalakaua Avenue for a noisy return to the park.

The rally and march were both covered by local and national media and reports were carried on the evening news as well as the Star-Advertiser.   Following are some photos:

Posted by Unknown at 5:27 PM No comments: